Women of Milton Keynes Blazed the Redways in suffragette style

Blazing Saddles, the unique, roving performance, which saw women across Milton Keynes jump in the saddle and cycle the Redways over the weekend, was a roaring success according to organisers.

Through movement, humour and costume, Blazing Saddles, which was part choreographed and part improvised, comprised of 20 local women, with the youngest participant being just 10 years old.

Along the route, which incorporated evolving sequences performed at several locations around Milton Keynes, including the Stone Circle, Peace Pagoda and the Bandstand, spectators were drawn to the group in their droves. “Altogether there were over 100 people supporting us which was fantastic.” Karen Poley, Creative Producer of Bicycle Ballet.

Blazing Saddles was commissioned by Pedalling Culture, and organised by Bicycle Ballet, a company which creates outdoor dance performances on bicycles. Created to celebrate the humble bicycle and the role it played in transforming female fashion at the turn of the century, the objective of the performance was to not only capture the public’s attention, but to reignite women’s love of cycling. 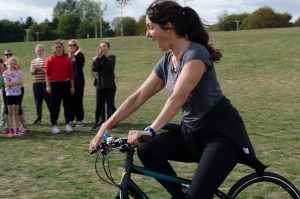 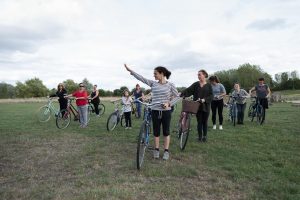 Categories: Uncategorized
Previous Next
Back